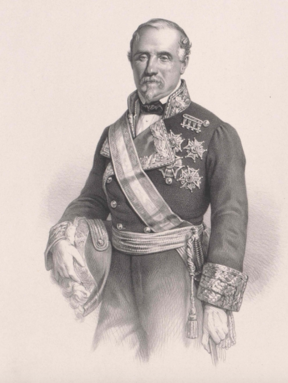 Often referred to simply as Carolan, Ireland's greatest classical composer who lived form 1670 to 1738, was a blind harper who created both traditional Gaelic/Celtic sounds and classical Baroque melodic instrumentation. Two of his compositions were made in honour of O'Donnells: Colonel Manus O'Donnell of Newport and his son Hugh O'Donnell.  The latter piece is known as Planxty Hugh O'Donnell and can be heard on the lower tab on right. Portrait of Turlough Carolan, on right by, J.C. Timbrell, 1844 (Wikimedia Commons). 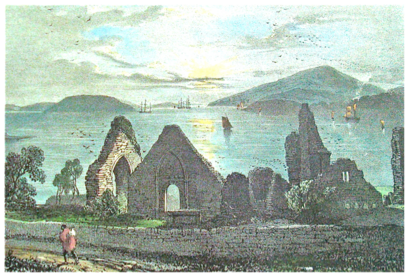 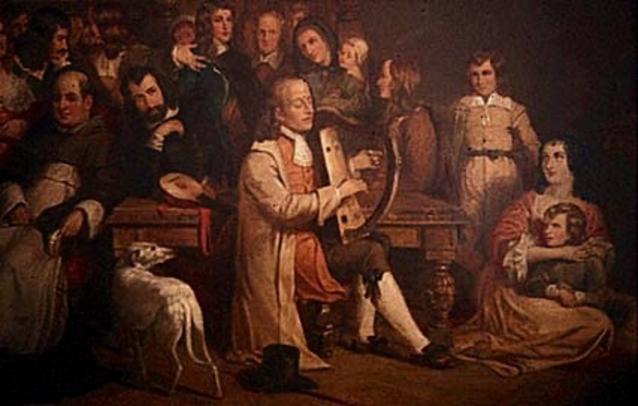 The musical genius of Turlough O'Carolan, the Blind Harper

​and his O'Donnell patrons

Above: The Holy Well, known as Tobair Ide, or Wether's Well, from whence the place-name for Tubrid in Ardfert, and the homestead of Tubridmore, ancestral home of the O'Donnells of Ardfert.  It was here that Saint Brendan the Navigator, was baptised. His legendary voyage in the 6th century AD, recounted in his Navigatio Sancti Brendani Abbatis, became the basis for the legend of his discovery of a great Isle, which Tim Severin, in his Brendan Voyage of 1978, tried to demonstrate could have been America, reached by a leather-clad boat.

Right: A brief essay on the historical presence of the Knights Hospitaller, i.e. the knights of the Military Hospitaller Order of Saint John of Jerusalem, in the County of Kerry in Ireland, from the 12th to 17th century, and in particular in the Ardfert area, Tralee, and Mount Crusline,  areas later settled by the O'Donnells of Tubrid, who hailed from Tyrconnell (published in the Journal of the Kerry Archaeological and Historical Society in Winter 2015). 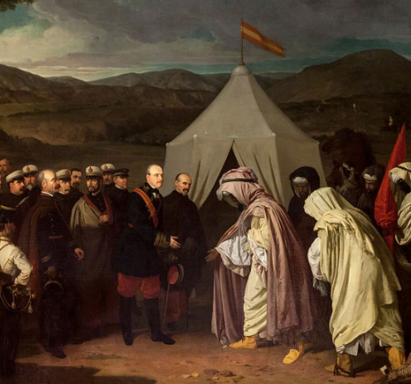 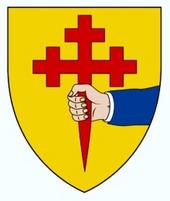 The Annals of the Kingdom of Ireland (Annála Ríoghachta Éireann) or the Annals of the Four Masters (Annála na gCeithre Máistrí) as they are commonly known, were compiled by Franciscan monks, based largely on earlier manuscripts then surviving, as a composite record in Gaelic of the history of Ireland from the time of the biblical Deluge until 1616 AD.  They were compiled near the ruins of their former Franciscan friary, known as Donegal Abbey, and also near the Drowes river in County Leitrim.  They were not translated into English until the 19th century,  secondly and most notably by John O’Donovan, with extensive annotations and commentary.  An electronic version of translation can be found in the Corpus of Electronic Texts (CELT) under the auspices of University College Cork (UCC). Click on the tab on upper right. For John O'Donovan's lavishly annotated translation, 2nd edition of 1856 (Vol I), see lower tab on right (other volumes can also be found on the  same Internet Archive)

Insights  on this page, scroll down:

The O'Donnell noble branches in Austria and Spain: some portraits

Die Teufelsbrücke am St. Gotthard Pass; c.1800.
(The Devil’s Bridge on the St. Gotthard Pass, in Switzerland) by Peter Birmann (Basel, 1758-1844; pen and black ink, brush and brown ink). On display in the Habsburg Staterooms at the Albertina Museum in Vienna.

This is the place where Hugh O’Neill, Earl of Tyrone, famously lost his pack-horse gold, and wealth when the animal fell into the gorge. This was during the so-called “Flight of the Earls” (the exile of the last independent Irish princes to Rome, the other being Prince Rory O’Donnell, Earl of Tyrconnell, whose arms are depicted on right).

The contemporary descriptive diary written by Tadhgh Ó Cianáin, during the journey in 1608, was translated into English by Rev. Paul Walsh and published in 1916 (see blue button on inner right). A history of the fate and fortunes of the Earls of Tyrconnell and Tyrone was written in 1868. The O’Donnell Clan re-enacted part of the journey at this point 400 years later in March 2008 (see video clip of Swiss TV in blue button on right).

Lady Mary Stuart O'Donnell,Princess of Tyrconnell, dictated a diary of her extraordinary subsequent exploits in 1627 to Alberto Enriquez. 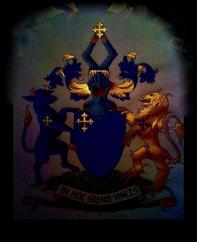 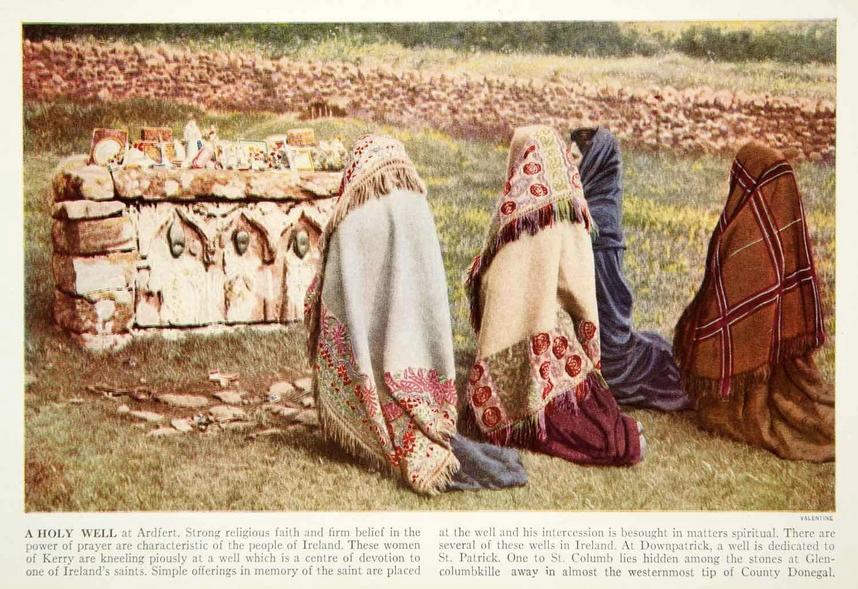 ​​The great scholar, John O'Donovan, translator of the Annals of the Four Masters, wrote extensive letters portraying the history, legends, and native peoples of locations all over Ireland in the early 19 th century as he traveled the length and breadth of the country for the Ordnance Survey of Ireland. In one such letter, of 12 October 1835, he reflected with nostalgia, blended with pathos and cynicism, on the degraded fates of the O'Donnells and remnants of other ancient Gaelic nobility left behind in Donegal's untamed wilderness. His later writings were thankfully less opinionated. Let us take a closer look at some of the most historic O’Donnells, now that our curiosity is also tweaked by the recent excavations in Valladolid and search for the remains of Red Hugh O’Donnell the Second. 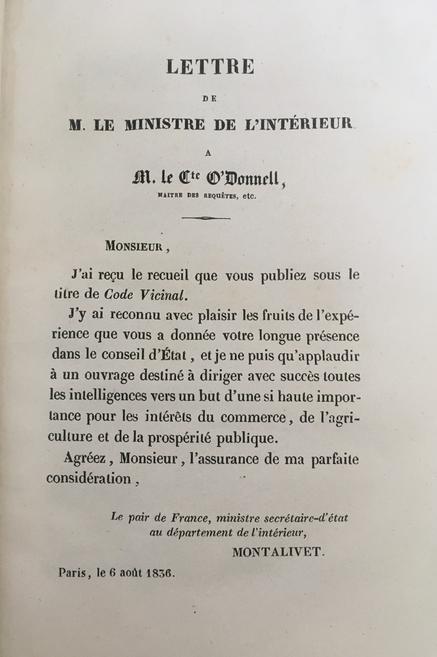 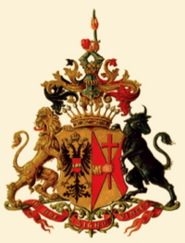 What did they look like?
Myth, Allegory, Prejudice and Evidence

Evidenced by their patronage of the Franciscan Monastery in Donegal, and dependence on Franciscan spiritual and material guidance in exile, the princely dynasty of the O'Donnells of Tyrconnell has long had a special relationship with the Franciscans in Ireland and abroad. The friars were also the spiritual counselors of the ruling O'Donnell dynasty, and educators of their children. Indeed the role of the Franciscans as confessors and moral authorities over the O'Donnells, from youth to old age and at death is well documented and O'Donnell princes were often laid to rest in Franciscan robes. Now, new challenges lie ahead to preserve this spiritual, monumental and intangible cultural heritage.

The House of Tyrconnell 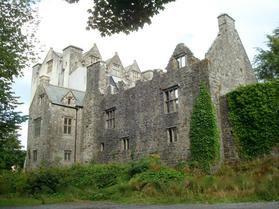 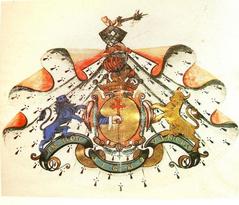 The Flight of the Earls - 400 years on Commemorations in Switzerland 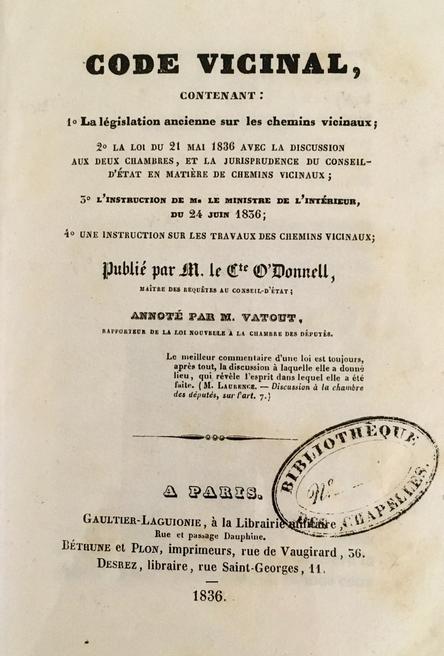 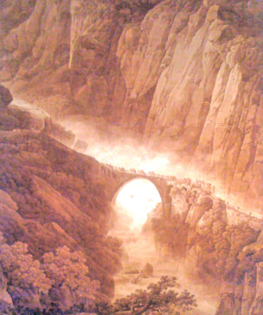 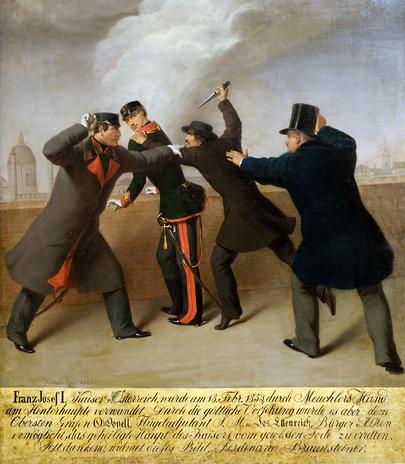 The Life of Red Hugh O'Donnell, Prince of Tyrconnell his burial in the Franciscan Monastery of Valladolid, and efforts at exhumation

An  Iconography  of  The O'Donnells of Tyrconnell 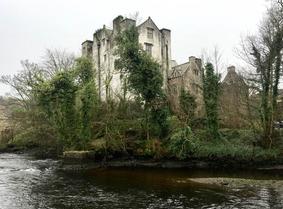 The Trials and Tribulations of
An Irish Princess in Exile 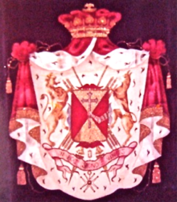 The Annals of the Kingdom of Ireland by the Four Masters

Saint Brendan the Navigator, his baptism at Tubrid, and years in Ardfert, and his Voyage across the Atlantic 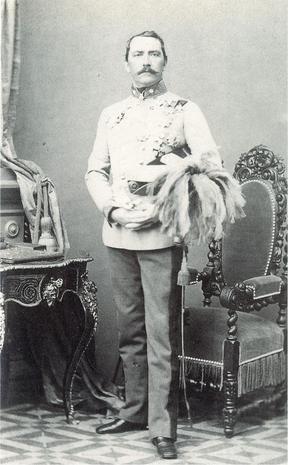 The Polity,
Sovereignty,
Diplomacy,
Territory
& Alliances
Planxty Hugh O'Donnell
(Flute and Harp)
The Annals of
The Kingdom of Ireland
by the Four Masters
(CELT)
Advisory Brief on Exhumation 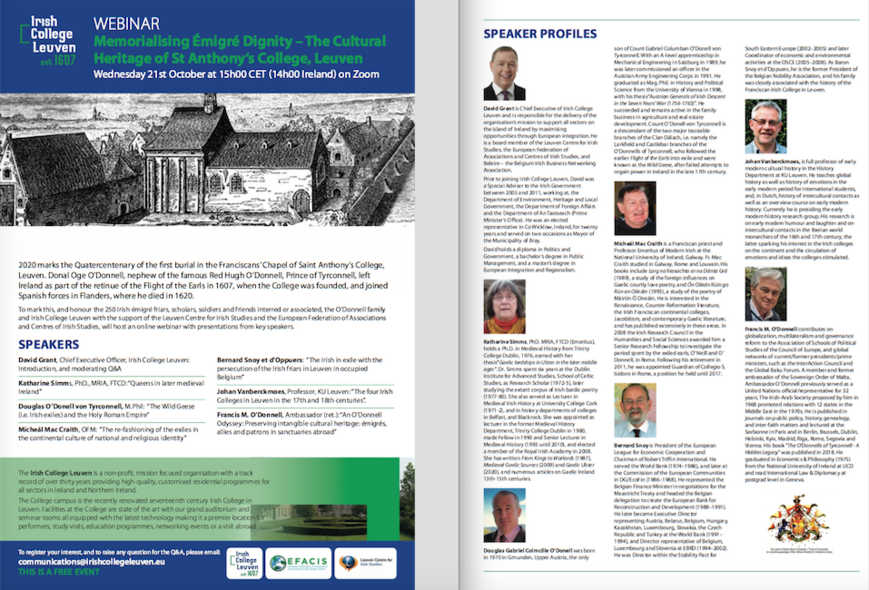 O'Donovan's Version
of 1856 of the Annals
(Internet Archive, Vol 1)

Above left: the tomb of the O'Donnell Counts in the Père Lachaise cemetery in Paris. Right: Jeanne Marthe Marie née de Pechpeyrou Comminges de Guitaut, Madame de Wendel, with her son by her first marriage; widowed, she later married Sigismond Anatole Comte O'Donnell, the last of the French O'Donnell Counts, who died in 1879, childless. She died in 1908.

From an Irish perspective, historical nobility was not restricted to titled nobility, but could descend by inheritance, or be obtained by creation. The use of the term here excludes the more generic and popular sense of “noble” as an adjective to describe a person’s character, achievements, or other publicly  recognised distinctions.  The legitimate bearing of authentic heraldic arms issued by a sovereign fons honorum or on such behalf by a heraldic authority is the most practical criterion applied in the traditions of Britain and Ireland.  Even so, it should be noted that while the bearing of heraldic arms is a normal adjunct and ancillary evidence of nobility, such arms are not the source of nobility but the consequence thereof. On right side blue tab: the paper on this subject from the 2nd International Colloquium on Nobility, Madrid, 20-21 October 2017, and hosted by the Real Asociación de Hidalgos de España (RAHE), and co-sponsored by the Fundación Cultural de Hidalgos de España (FCHE), the International Commission for Orders of Chivalry (ICOC), Famiglie Storiche d’Italia (FSI), and the Instituto Internacional de Genealogia y Heráldica (IIGH).

How to honour the heritage
of Prince Red Hugh O'Donnell
Historical Significance
of the Code Vicinal
The History of
Royal Women
(Amy E. Kelly, 2020)

The Beatha Aodha Ruaidh Uí Dhomhnaill – The Life of Hugh Roe O’Donnell, Prince of Tirconnell (1586-1602) is the biography of Red Hugh by Lughaidh Ó Cléirigh (fl.1603 – 1616), upon which the Annals of the Four Masters is partly based and one of whose authors was his cousin Micheal Ó Cléirigh.  He also participated in the renowned Contention of the Bards. Their family had been one of Ireland’s foremost scholarly families for centuries, and served with distinction as the hereditary scholars and historians to the O’Donnell dynasty. The Beatha was not translated into English until 1895 by Denis Murphy, and it includes much more detail on Red Hugh’s life and related aspects of history than the later Annals of the Four Masters. Being the earlier account, it may be in some respects considered the more authoritative.  The Beatha and translation of 1895 can now be found on the Internet Archive. See the several tabs on right, for his biography and the related aspects of the search for his remains in Valladolid, and the preservation of his dignity-in-repose and of our common heritage.

On Wednesday 21 October 2020 a webinar was held under the auspices of the formerly-Franciscan Irish College of Saint Anthony in Louvain, now the secular Irish College Leuven (ICL), supported as an all-Ireland institution in Europe by the governments in Belfast and Dublin. It was the first webinar of the ICL and was held under the commemorative theme "Memorialising Emigré Dignity", to mark 400 years since the first burial in the Chapel of St. Anthony in September 1620, that of my family’s ancestor Donal Oge O'Donnell, nephew of the famous Red Hugh O’Donnell, Prince of Tyrconnell, and who participated in the Flight of the Earls as part of the entourage of his other uncle and successor as Prince of Tyrconnell, namely, Rory O’Donnell, Earl of Tyrconnell. Donal Oge was the ultimate beneficiary-in-remainder to the Lordship of Tyrconnell in the Letters Patent of King James I for the Earldom of Tyrconnell, but died prematurely of wounds inflicted in 1620.

The webinar also held to honour the 250 Irish emigré friars, scholars, soldiers and friends interred or associated with the College over the centuries, and brought out the cultural and social richness of the diverse personalities associated over the centuries, many famous in the annals of Irish history, and reflecting a great number of Irish clans and historic families. My most recent visit to Leuven's Irish College was in 2017, with an old friend, Baron Bernard Snoy et d'Oppuers, on the occasion of the 90th anniversary of the re-opening of the Irish College in 1927, when Bernard's grandfather and my second cousin thrice-removed, the late Cardinal Patrick O'Donnell, presided. Following on that visit, a commemoration was planned, but due to the COVID-19 pandemic, this evolved instead into the webinar which was organized with the keen collaboration of David Grant, Chief Executive Officer of the Irish College Leuven, and with the support of the Leuven Centre for Irish Studies and the European Federation of Associations and Centres of Irish Studies.

The webinar was hosted and moderated by David Grant, Chief Executive Officer of the Irish College Leuven, and the speakers were Dr. Katharine Simms, PhD, Fellow of Trinity College Dublin and member of the Royal Irish Academy, who spoke on the theme of “Queens in later medieval Ireland”; Mag. Douglas Count O’Donell von Tyrconnell, M. Phil., who addressed the subject of “The Wild Geese and the Holy Roman Empire”; Prof. Fr. Mícheál MacCraith, OFM/NUI (Galway) of the Franciscan House of Studies in Dún Mhuire, Killiney, who treated of “The re-fashioning of the exiles in the continental culture of national and religious identity”;Baron Bernard Snoy et d'Oppuers, who gave his exposé on how his family helped give sanctuary to “The Irish in exile with the persecution of the Irish friars in Leuven in occupied Belgium”; Prof. Johan Verberckmoes, KU/Leuven, who talked about “The four Irish Colleges in Leuven in the 17th and 18th centuries”, concluding with my own presentation on “An O’Donnell Odyssey - Preserving intangible cultural heritage: emigrés, allies and patrons in sanctuaries abroad”.

Read the research background to this Webinar here 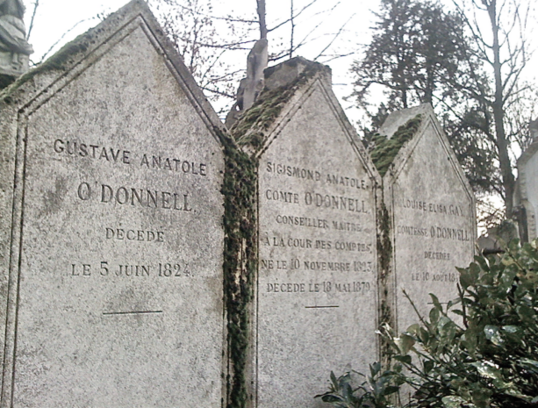 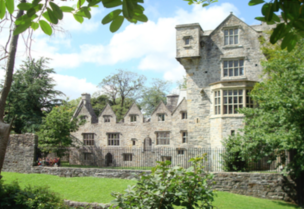 Above, the Arms of Don Leopoldo O'Donnell y Jorris, 1st Duke of Tetuan and Count of Lucena (left), later Prime Minister of Spain, after the Battle of Tetuan in Morocco, and the Treaty of Wad-Ras (right), bringing an end to the Moroccan-Spanish War. 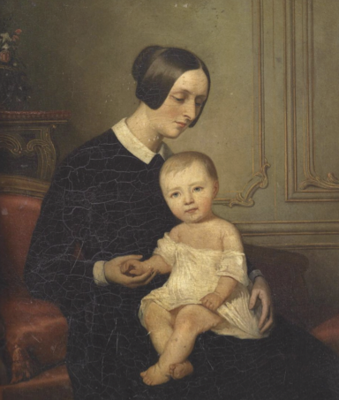 The Court of Tyrconnell

The O'Donnell Counts in France