Forthcoming, under preparation:
A Reference Guide to the Collected Works

A catalogue (under preparation ) of an estimated 10,000 articles written over a period of 60 years, most of which were published in various journals, periodicals, or other collections.

The Feast of Domhnall 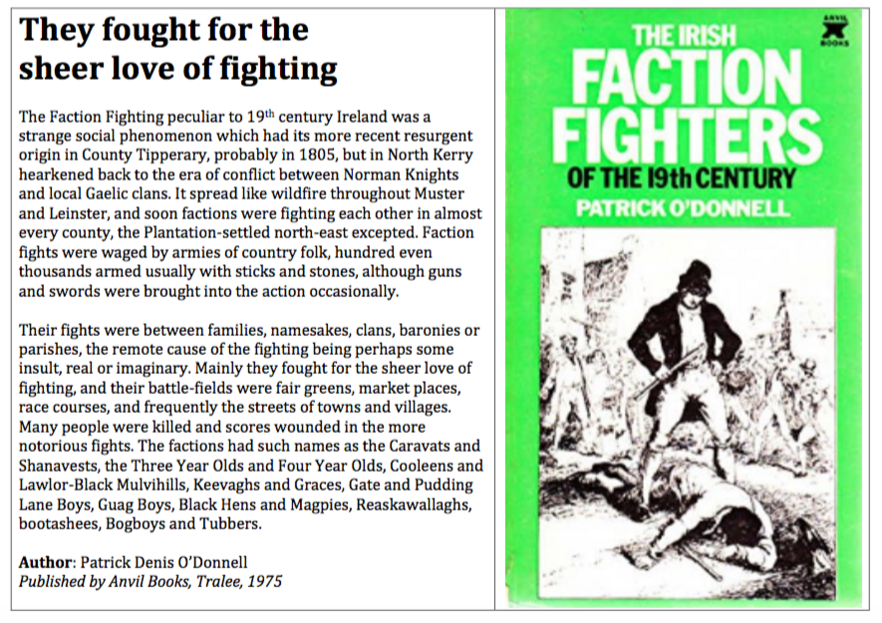 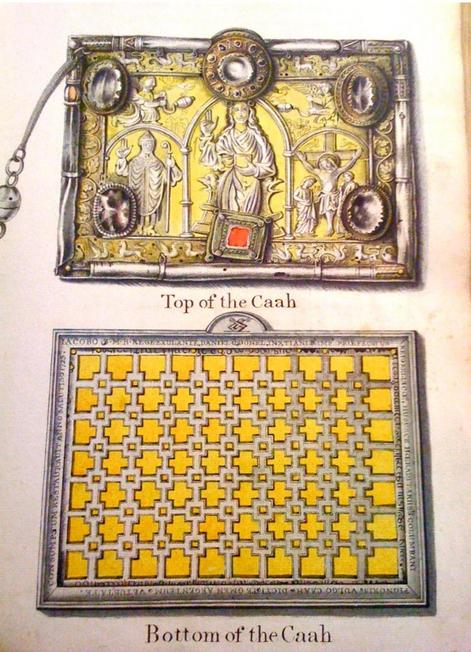 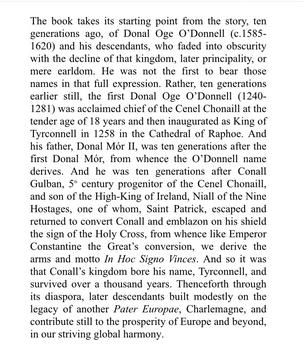 The Chevalier from Mullet

​in Gaelic translation direct from the Greek, by Uilliam O'Domhnuill (William O'Donnell). Trinity College Dublin is “The College of the Holy and Undivided Trinity near Dublin founded by the Most Serene Queen Elizabeth” Queen of England, France and Ireland, per Charter of 3 March 1592. The three first scholars mentioned in the Charter were Henry Lee, William Daniell, and Stephen White. This William Daniell (O’Donnell) was also a Gaelic scholar, known as Uilliam O’Domhnuill, who translated the New Testament into Irish (Gaeilge) from the Greek.  Afterwards one of the college's first elected Fellows, while at Trinity College, he took up the work of translating  The New Testament (Tiomna Nuadh) into Irish, the quarto edition of which was printed in 1681-5. He became the Anglican Archbishop of Tuam. Here is a nineteenth century re-print of the original, from 1849. 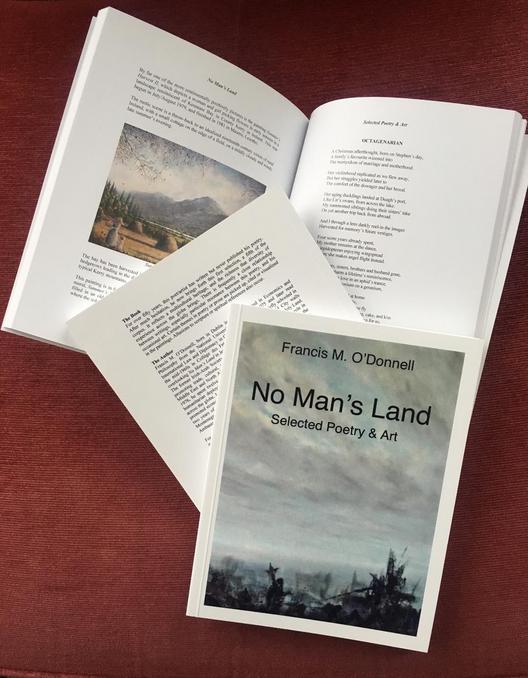 For over fifty years, this poet/artist has written but never published his poetry. After much hesitation, he now brings forth this first selection, a fifth of the corpus. It reflects a multicultural heritage, and the richness that diversity of experience across the globe can bring over time. There is frequently a close relationship between writings, especially particular resonance between this poetry, and his occasional art. Certain themes in poetry or prose are picked up, cited or visualized in the paintings. Allusions to scripture or spiritual references can also occur.

This small volume can be

ordered from this supplier

based in Naas, Co. Kildare

​The Cathach     is Ireland's most ancient manuscript dating to about 555 AD. St. Colmcille/Columba (521-597), lived in the 6th century AD, and is one of the three patron saints of Ireland, along with Brigid and Patrick. A collateral ancestor, and patron saint, of the O’Donnells of Tyrconnell, he wrote the Cathach psalter (facsimile of a manuscript page below left), converted the pagan Picts, of what later became known as Scotland, to Christianity, founded the monastery of Iona where later Scottish kings were buried. One of our own kin of the Cenel Conaill, and O'Donnell precursor from Loch Gartan in Donegal, as a pre-Schismatic saint, he is venerated by Orthodox, Catholics, and Protestants. He is also inadvertently responsible for the first codification of copyright law in the world, when judged wrong for copying a psalter "to every cow its calf, and to each book (belongs) its copy".  That judgment, codified in the Brehon Laws of ancient Ireland caused a war, a regicide, and his exile that led to the conversion of Scotland, and the first codification in ancient Brehon law of the notion of copyright, well over a thousand years before the modern equivalent in the Statute of Anne, the Copyright Act of 1710.  The famous copy became the Cathach or battle-book of the O'Donnell dynasty, and Columba went on to found famous monasteries, notably at Iona, in Scotland. His monks also founded the church of St. Germain-en-Laye, outside Paris, where Stuart exiles were laid to rest, and where Sean or Jean Count O'Donnell wed in 1711, founding a dynasty of French O'Donnell counts in France until extinct in 1879. The early Scots were the Irish Gaels who gave their name to their colony, Scotland.  The Cumdach (illustration below right), or book-shrine of the Cathach, was once adorned with lapis lazuli that often adorned some such book shrines - evidence of early medieval trade reaching far-off Afghanistan. Click icon for Cathach text: 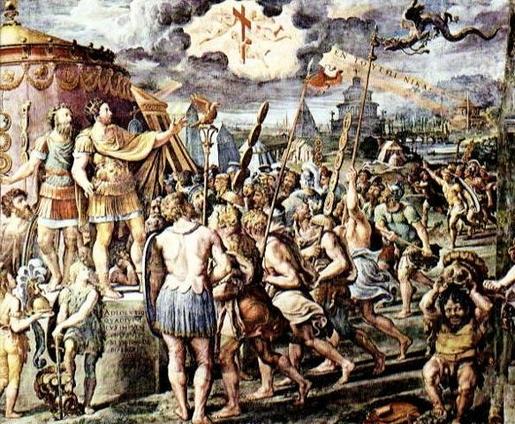 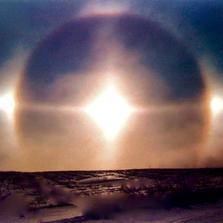 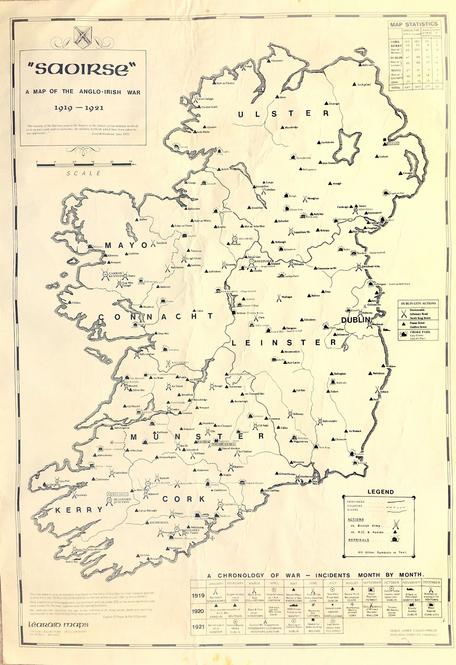 An Irish Princess in Exile

SAOIRSE - Map of the Anglo-Irish War (1919-1921).   In 1985, Comdt. Patrick Denis O’Donnell, and his comrade in arms, Comdt. Eoghan O’Regan, both of the Irish Defence Forces, known in Gaelic as Óglaigh na hÉireann (“Warriors of Ireland”), brought out Saoirse (Freedom), a Map of Ireland, focused on the War of Independence (1919-1921), also called the Anglo-Irish War (the latest of many Irish struggles against invasion and colonization) and which O’Donnell had researched at length, covering all of the military incidents of engagements, skirmishes, ambushes and assaults, between Crown Forces (British Army, with the British-controlled Royal Irish Constabulary, and their Auxiliaries) against Irish insurgency forces fighting for Independence. The map gives locations, casualty figures, and a chronology of 30 months of conflict. The map also indicates the regional concentration of incidents more in the southwest than north or east. While he did the research, and tabulations, the map design was done by Comdt. O’Regan, who also wrote the article here which appeared published in An Cosantóir, the Irish Defence Journal to which Comdt. O’Donnell was a regular subscriber and a frequent contributor. The map was published by Léaráid Maps of Dun Laoghaire on a scale of 1:575,000, and sized 32” X 24” (inches). The I.R.A. indicated on the map indicates the old Irish Republican Army precursor of what became in time the national official Irish Army, and should not be confused with the banned paramilitary entity that later arrogated the same name and acronym. 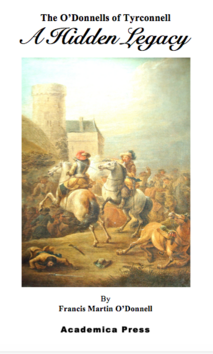 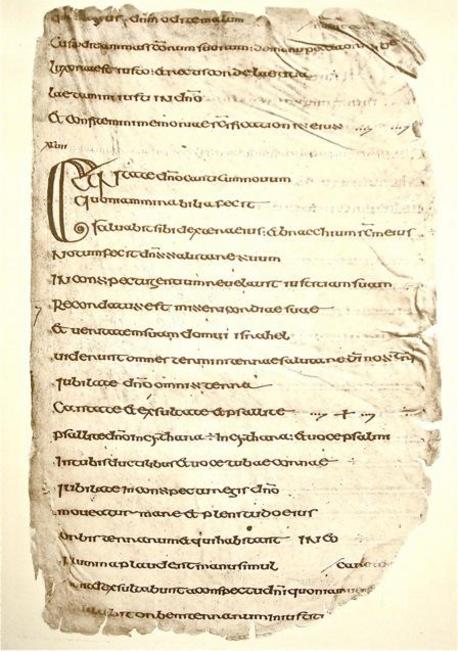 The Faction Fighters of the 19th century,  by Patrick Denis O'Donnell 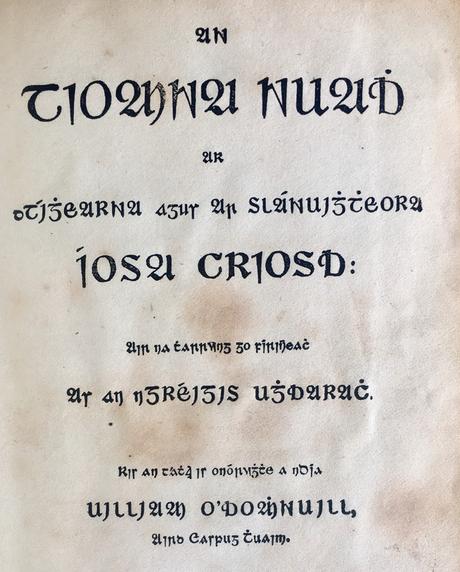 Bibliography of Publications
Extract from The Azure Suite,
6th movement, Opus 9
The Ghost of Ballyheigue

The Vision of the Cross, Emperor Constantine the Great's vision before the Battle of the Milvian Bridge (by the School of Raphael in the Sala Costantino, Apostolic Palace, Vatican). The vision inspired the grant of the Arms of the Holy Cross by Saint Patrick to Conall, ancestor of the O'Donnells, and the motto,In Hoc Signo Vinces, which appears in Greek in this painting:  "Εν τούτῳ νίκα" (by this sign, conquer). 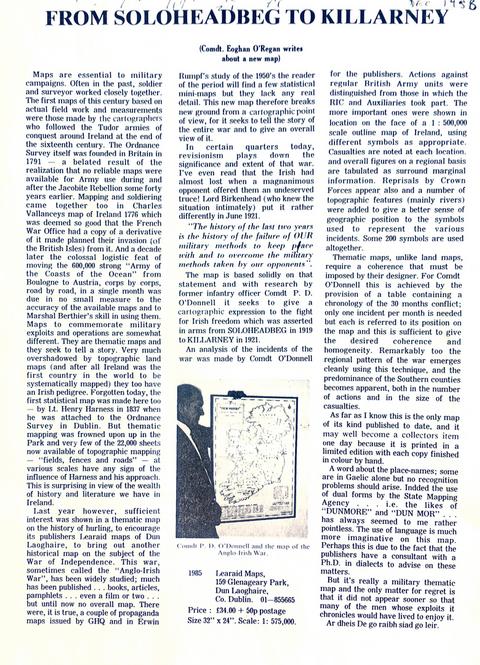 The O'Donnells of Tyrconnell

This book is presented for those including the many at home and abroad in the Irish diaspora with an interest in the hidden heritage of Ireland to lend a glimpse into the Ireland that was, and the diversity of yearnings and perspectives that made it was it is today. Curious academics, historians and genealogists may also find something of value.

under its Maunsel Irish Research Series